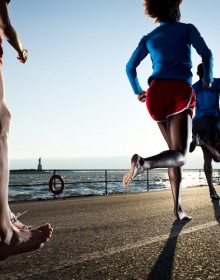 What is barefoot running all about?

There is growing interest in the idea of barefoot running. Is it another trendy fad or sound advice?

Also known as forefoot running, midfoot running and Chi running there are clear similarities between all these styles of running which are gaining some momentum and demand further investigation. The headline attraction of this style of running is reduced injury risk and increased running efficiency which leads to improved speed and endurance.

The original premise is undeniable that despite ever “improved” running shoes, the incidence of injury from running is at least static if not getting worse. This demands the question “why?” As with many aspects of “science” around sport there is the balance of commercial interest to add to the equation. Is science leading the shoe maker or is the shoe maker leading the science. I don’t intend to try and answer that question here but I do believe that much of the research into running efficiency has come from genuine interest in reducing injury rather than commercial interest. Daniel Leiberman has lead much of the research from Harvard University. Initially seen as hippy running around the campus in barefeet, he is now much more respected and probably the leading voice on the subject. 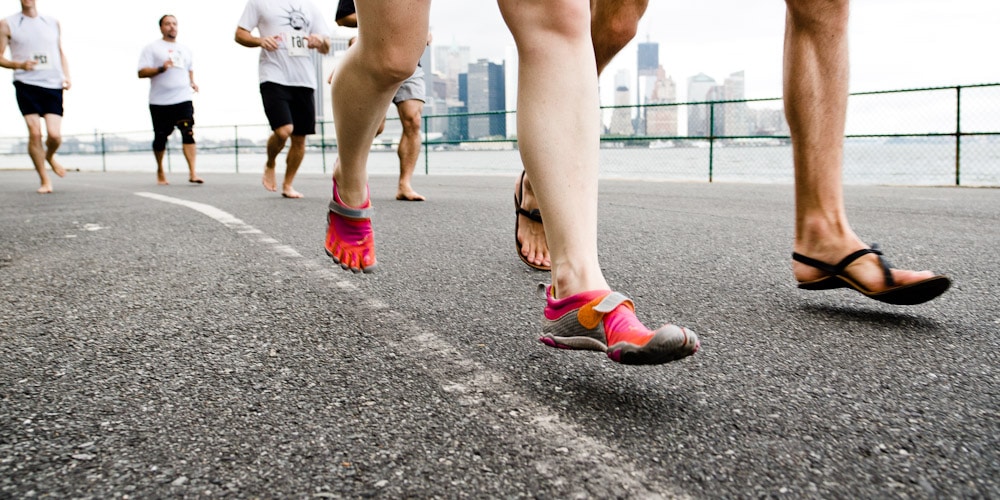 As with my previous thoughts on Low Back Pain, it is clear that advances in medical knowledge, scanning ability and technical know how have not translated into reductions in frequency of injury in running athletes, particularly at the amateur end of the sport. An interesting observation might be that from an early age we get taught how to do things. The availability for kids to receive coaching for football, tennis, cricket, gymnastics etc is growing rapidly both in and out of school – but did anyone ever teach you how to run?Probably not! It might take an hour to assess you  for your new £100 worth of trainers and the staff do a good job because they look at you running down the road or on a treadmill, but do they ever try and change what they see – unlikely. We just let people do what come naturally, and most of the time it is a bit of a disaster.

Possibly some simple early advice about posture, cadence and how the body wants to work would be enough to reduce running injuries. From what I understand of barefoot running this is the great advance. It encourages the body to do what is essentially natural. It gets an athlete to think about how they run just as you would think about your golf swing or your tennis serve or you swimming stroke.

A conventional running shoe has a built up heel to offer cushioning and accommodate a foot bed that offers some element of control to the hind foot and midfoot. It also encourages the athlete to heel strike which sends a huge braking force up through the system with 6%-7% of body weight coming to a complete stop on each contact. Once you start to do the maths of how many strides you take in a 5k or 10k run, it quickly gets to be a big number.

The figures for barefoot running, however, are more appealing. Lieberman suggests that with good technique the number comes down to 1.5% of bw each stride. Suddenly the maths looks better.

Secondly because the barefoot style allows the natural shock absorbing mechanism to work the max peak impact force is reached more gradually rather than a vertical spike as seen with the heel strike graph. Again this should allow the body to accept this load in a more sustainable way.

Finally the structures that form the shock absorbing system also pay back some free energy with each stride. The fascia that forms the plantarfascia wraps under the heel to blend into the Achilles tendon which blends into fascial pathways that support the knee, through to the hip and pelvis and ultimately influence your spinal posture. These fascial tissues will respond to repeated load. By applying a plyometric force to the system  it gradually responds by laying down more and better organised protein to create “stiffness” in the tissues. If used effectively this system can supply 30% of the energy required for each stride purely from recoil energy.   3k of you 10k run for free!

It all looks quite attractive. As with so many things around human movement and performance, the body has evolved to tolerate force and perform the most complicated and repetitive tasks. The near perfect system exists to tolerate the forces created by running without the need for complicated and expensive bits of engineering. If we can get back to what is natural our bodies will probably be happier for it. Maybe running barefoot is a bit too extreme but wearing a shoe that offers minimal support and allows natural movement is possibly the way to go. Also we have to remember that this requires some training. A new rhythm needs to be learnt, a new feel of how the foot works is required and more importantly the fascia needs to be given to time to adapt to be able to tolerate the new demands being placed on it.

Possibly the most significant gain may come from athletes being more aware of the skill involved with running, doing appropriate conditioning alongside their running and taking a bit of time to look in a mirror and see if their body schema matches reality.

I hope you may find this of some interest. I will post again in a couple of weeks and consider a training structure of how to transition from one style to another.