I read an interesting article earlier this week on my new favourite website “Nourish, Balance, Thrive”. Dr Tommy Wood highlighted a piece of research suggesting that walking barefoot outdoors could reduce your risk of a heart attack. 2 days later, I saw another article about the “Science of Grounding”. This is a subject I had not previously encountered but suddenly it popped up twice and inspired me to write about it. 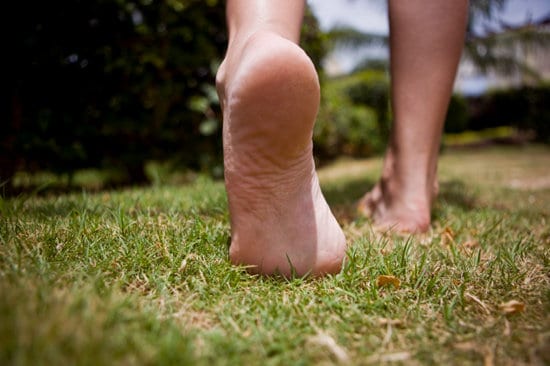 On the surface it sounds very woolly and a bit hippy, but when you think about it, it starts to make sense and it is actually so simple and practical you begin to wonder what’s to lose.

The study involved testing people by connecting their feet by a wire to a metal spike inserted into the ground. However, walking barefoot or simply sitting or lying on the ground and touching with any exposed skin will also connect you to the earths surface.

The theory is that the negative electrical charge around our red blood cells will make them repel each other and prevent aggregation, clumping together. The study measured that the negative charge was improved once people were grounded. They measured the relative velocity of red blood cells which improved with grounding. They also measured red blood cell aggregates, which decreased when people were grounded. Both these measures have a significant impact on the risk of Cardiovascular events and grounding would appear to have a positive effect on both.

Other similar studies have also found that grounding may reduce our levels of cortisol, improve circadian rhythms, improving sleep patterns, and reduce chronic levels of inflammation which are responsible for many of the diseases associated with modern living.

So, the medicine is simple. We need to come into contact with the earth. Simple you might think, but when you think about a normal day, we don’t touch the earth very often. We live in rubber soled shoes, we stay indoors too long and walking around Tesco’s in barefeet looks a bit weird, but if it is going to make my heart healthier that is a price I am prepared to pay.

So, the advice is simple. Even if you don’t want to become a committed barefoot warrior, at least when the chance offers itself, get your shoes off and walk on the grass, on the beach, in the sea and reconnect with the Earth.